Url (This is optional and will be automatically shortened)

You should to see this and more posts.

Last night we had a wonderful evening tracing what the Bible has to say about the City as well as praying, dreaming and discussing about future direction our city ministry could take after the cafe ministry ends on November 30th 2018.  If you weren't able to make it, but want fuel to pray or an opportunity to contribute suggestions - then you can relive the evening and working through the prayer material below.  If you have any suggestions or contributions, please just reply to this e-mail or contact David.Nixon@carrubbers.org 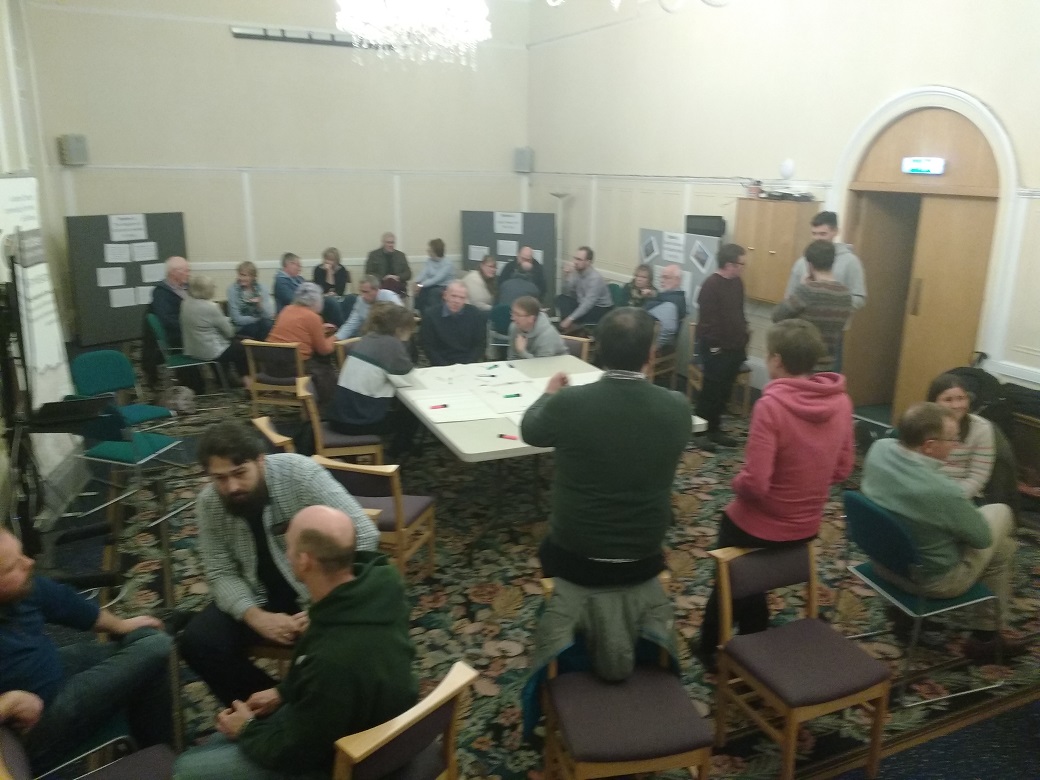 Have you come across the Edinburgh City 2050 Vision project?  People across the city are being asked to dream about what the city could be like in 30 years time, as they complete this sentence: “In 2050 my Edinburgh will be…”.

As Christians we believe that Jesus has bigger and better dreams for the future of this city and its citizens.  We as a church want to play our unique part in the mission of God in Edinburgh - as we pray “Your Kingdom Come, Your Will Be Done – On Earth [In Edinburgh] as it is in heaven” and ask God to align us with His heart and purposes as we “seek first His kingdom and His righteous ways”.  That’s why we’re here tonight.

The theme of city is an important thread that runs throughout the Bible. The Bible begins in Genesis 1-2 with God’s work of creation and climaxes with human beings living with God in a beautiful Garden, given the commission to cultivate and develop its potentials for the glory of God.  The Bible finishes in Revelation 21-22 with God’s work of new creation, with redeemed humans living with God in a beautiful Garden-City, which has been prepared by Jesus for His people.  In between, there runs a thread of the conflict between the City of Sin and the City of God:

So a city has a great deal of potential – Tim Keller puts it this way: "the city is like a magnifying glass, bringing out both the best and the worst in human beings".  In our first section of prayer we’re going to reflect and pray about the Lordship of Jesus and God’s heart for the city.

(1) TIME FOR ORIENTING OURSELVES IN THE WORD

Prayer Station 1: The Kingdom of God and the Lordship of Christ

Prayer Station 2: The Heart of God For The City & Its People

(2) TIME PRAYING FOR THE CITY

Cities are often the places where culture is created and new ideas formed, before flowing out to the rest of the nation (and increasing in our globalised age, out to the world).   As ambassadors for King Jesus, we want to embody the counter-cultural values of His kingdom, as we live, love, show and tell the gospel.

Prayer Station 3: Gospel Initiatives and Opportunities in the City

Here are some existing organisations which are seeking to make a difference for Christ in the city whom we can support in prayer:

Think of Christians you know who are involved in some of these sectors/spheres of society (Government, Education, Healthcare, Finance, The Arts, Industry, Scholarship, Media, Family Services, etc.) - pray for them by name to be faithful in making a difference for Christ in these places:

“You are the salt of the earth…You are the light of the world. A city set on a hill cannot be hidden. Nor do people light a lamp and put it under a basket, but on a stand, and it gives light to all in the house. In the same way, let your light shine before others, so that they may see your good works and give glory to your Father who is in heaven” (Matthew 5:13-16)

Praying for our personal gospel frontlines (around a map of the city, with people marking where God has placed them to shine and speak for Him) - with prompts to pray for neighbours, colleagues, kids' schools, sports clubs, etc.  Pray that we would be fruitful in making a difference for Jesus: “By this my Father is glorified, that you bear much fruit and so prove to be my disciples...You did not choose me, but I chose you and appointed you that you should go and bear fruit and that your fruit should last” (John 15:8,16).

Mark Greene suggests there are 6M's for being fruitful for God in our different spheres of influence/frontlines for mission:

The big question: "If we could do anything with the former cafe space and budget - to make a difference for God's kingdom, to make Jesus famous in this city, to see lives transformed by the gospel - what would be your dream?"  We'll have time for people to discuss and pray in smaller groups, and there will be a table with a sheet of paper for people to start writing down things from their discussions.